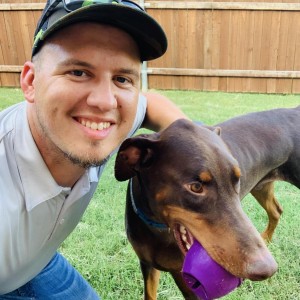 How to Spot Giardia in Dogs: Does Your Dog Have Giardia?

Giardia can spread to your dog in a number of ways.

​Learn how to tell if your dog is infected with giardia, the symptoms, and treatments.
​Does your dog seem lethargic and look like they’re not feeling too well? Have you noticed that they have diarrhea or that they’re vomiting every day?

Although it can be tough to detect, there is a parasite that could be causing your dog’s discomfort. Giardia is an intestinal parasite that can be fatal to puppies and older dogs.

If you suspect that your dog has Giardia, this article’s for you. We’ll give you the inside scoop on Giardia in dogs and how to get rid of it.

How is Giardia Spread?

How do you get Giardia? Your dog can get it several ways. If they eat poop that has been infected with Giardia cysts or drink contaminated water, they may develop the condition.

People can get Giardia from dogs, but using caution when you handle dog poop makes this unlikely.

In general, it’s best to avoid places where large numbers of dogs use the bathroom. Dog parks may be safe, depending upon the thoroughness of their cleanup crew.

Symptoms of Giardia in Dogs and Puppies

Giardia lives in the intestine, then matures into cysts and is passed out through the stool. Common symptoms of Giardia are diarrhea and bloody stools.

You may also notice mucus in the stool, a green color to the stool, or weight loss over the course of several weeks.

Puppies are at high risk if they contract Giardia. Their immune systems aren’t as well-developed as older dogs and the condition could be fatal if not treated.

How to Treat Giardia in Dogs

If you suspect that your pooch has Giardia, take them to the vet immediately. The vet will perform a series of tests that are designed to isolate and identify the parasite.

You’ll also have to disinfect your home, and you may have to get a water filter that filters out Giardia cysts. If you have a well, get it tested for the presence of the parasite.

​Depending upon the severity of their condition, your pet may have to take medication for a few weeks. Until they feel better, it’s best to skip the dog park.

Get the Scoop on Poop

Some dogs can get Giardia and never show any symptoms. They can, however, pass on their illness to other dogs through their fecal material.

If you suspect Giardia in dogs or puppies, talk to your vet and bring your dog in for an examination. In addition to disinfecting your home, you may have to clear out your back yard, especially if several dogs poop in the same contained space.

We can work with you to clear your yard after a Giardia outbreak. We offer comprehensive poop removal services for yards of any size.

​Even if your dog isn’t sick, it’s a good idea to remove the poop from your yard on a regular basis. If you have young children who like to play outdoors, it’s a great feeling to have a clean and clear yard.

Give us a call or contact us online to schedule a residential or commercial poop scooping session!

Department of Doody
Fort Worth, TX 76179